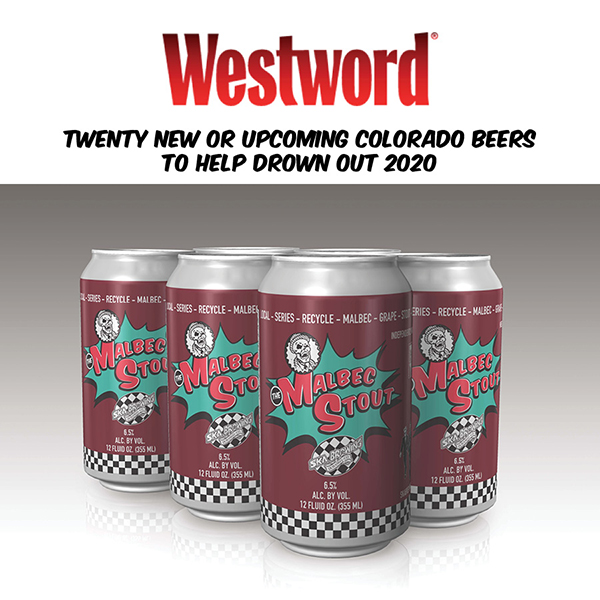 Twenty New or Upcoming Colorado Beers to Help Drown Out 2020

We’re heading into the final stretch of 2020 — and it’s going to be a bumpy ride. Between the pandemic, the presidential transition, the usual holiday angst and cold weather, we’ll all need something to warm our insides and gently relax our eyelids. For this, we rely on Colorado’s vast array of craft breweries, many of whom are continuing to pump out new and creatives beers despite less business and fewer resources.

So whether you’re into dark stouts, IPAs, sours or lighter lagers, there’s something on this list of twenty new or upcoming beers that should help get you to January.

Barmen Pilsner
AC Golden/Coors
For 25 years, Coors has been brewing a special German-style pilsner named for Adolph Coors’s home town and served only at the brewery and in a handful of bars in Golden and the Denver metro area. That changed in October, however, when Coors’s pilot brewery, AC Golden, began canning Barmen Pilsner and selling it as part of a special holiday twelve-pack that also comes with Coors Banquet and Batch 19. All three lagers are special to the Coors family and have only ever been brewed in Colorado. The beer is so special to the family, in fact, that Barmen comes with pouring instructions on the cans to help people get it right.

Bock
TRVE Brewing
Over the course of this troublesome year, TRVE Brewing began canning some comfort beers — nearly straight-up versions of classic styles — including a new German pilsner, a porter, a hefeweizen, a couple of IPAs and a festbier-style lager. The newest one to hit cans is Bock, a 5.8 percent ABV lager with a goat as its mascot. TRVE Bock has not been released yet, but look for it in the coming weeks.

Darklands Dark Lager
Ratio Beerworks
Darklands is the third in Ratio’s rotating seasonal lager series, and although the brewery makes the dark lager every fall, this is the first time it’s been sold in cans. “While dark in color, this toasted malt-forward lager with notes of cocoa bean is still an easy drinker, and its crisp, clean finish is perfect for the fall breeze,” the brewery says.

India Pale Lager
Prost Brewing
Prost Brewing revamped its lineup and its look this year, bringing forward a series of seasonal releases. One of the new beers is Prost India Pale Lager, which the brewery calls a “hop-forward lager showcasing the flexibility of German malts and hops. The aroma is a blend of red berries, bright citrus and subtle nectar fruits.”

Lone Tree IPA
Lone Tree Brewing
Just six months after launching its first year-round IPA, Lone Tree Brewing has decided to revamp and re-release the beer based on consumer feedback. The new Lone Tree IPA is hopped with a blend of Citra, Cascade and Simcoe hops “that create bold citrus aromas, moderate hop bitterness that’s been toned down from the first recipe, and a crisp finish,” the brewery says. It’s less bitter and more easy-drinking than its short-lived predecessor.

Hazy IPA
Upslope Brewing
What’s this? A hazy IPA from Upslope? Indeed, this Boulder brewery may be one of the last of Colorado’s largest beer makers to produce and package a hazy IPA. But, hey, time is meaningless in 2020 — and this beer will debut right around the New Year, anyway, as a new year-round offering. Brewed with kveik yeast, this 6.6 percent ABV hazy IPA will have notes of orange peel, pine and guava.

Thick Haze New England-Style IPA
Oskar Blues Brewing
The latest New England-style IPA from Oskar Blues is called Thick Haze. It’s a 7 percent ABV beer that was dry-hopped with Galaxy, Cashmere, Calypso and Eureka hops for notes of pineapple, melon and mango. Oskar Blues developed the beer in its taprooms in Colorado and North Carolina before canning it as a seasonal.

Wild Christmas Ale
Upslope Brewing
The latest entry in Upslope’s series of beers made from its traditional winter warmer Christmas Ale and then fermented with Brettanomyces yeast and various fruits or spices hits shelves in late November. This one sounds like it will be particularly festive, as it includes Saigon cinnamon, orange juice and orange zest. Wild Christmas Ale is different every year, but it’s always very complex and one of my favorite holiday treats.

Solera No. 3
Mockery Brewing
This is an amber ale that was aged for six months in Sangiovese puncheons before being transferred to cabernet sauvignon barrels and aged for another four months with pomegranate and sweet cherries. The final beer was then blended with previous versions. So, yes, it is going to be complex. But so are your holiday celebrations this year, so this sour beer could be the perfect accompaniment to socially distanced gatherings. It’s available now at the brewery and probably at a few local liquor stores.

Peanut Butter Yeti Imperial Stout
Great Divide Brewing
The latest in Great Divide’s lineup of Yeti variations, Peanut Butter Yeti is now available on tap at both of the brewery’s taphouses and in sixteen-ounce cans. And this isn’t the only Yeti sneaking around town during the holidays: You can also find Barrel-Aged Yeti and others at the taprooms and in bottles or cans.

Peanut Butter Porter
Dry Dock Brewing
Dry Dock Brewing has been brewing this acclaimed peanut butter porter — one of the oldest peanutty brews on the market — and serving it on tap for years. But the brewery has decided to can it for the first time and release it only as part of its Booty Box mixed twelve-pack. The 6 percent ABV beer is made with cacao nibs and peanut butter.

Lugene Chocolate Milk Stout
Odell Brewing
This beer is not new, but it doesn’t show up in Odell’s rotation every year, so it’s worth noting when it becomes available. An 8.5 percent ABV chocolate milk stout, the beer is brewed with milk sugar “to create a rich and creamy brew that reminds us of a cold glass of chocolate milk,” the brewery says. Lugene is named in honor of the brewery’s favorite local farmer, who hauls away Odell’s spent grain. Because of the can shortage, the beer is being sold in bottles.

Pecan Pie Imperial Stout
Finkel & Garf Brewing
This Boulder brewery has the perfect treat for celebrating Thanksgiving: Pecan Pie Imperial Stout. A 9.6 percent ABV bomb, the beer is loaded with roasted pecans, aged on cocoa nibs and then hit with a touch of vanilla. It’s available now in the taproom and will see limited distribution to liquor stores.

Malbec Stout
Ska Brewing
Ska Brewing first put together a group of four rotating stouts about five years ago, and has brought some of them back intermittently since then. Most of them have a lower ABV than typical stouts, which is part of Ska’s session-style ethos these days. Malbec Stout is brewed with Malbec grape must and rings in at 6.5 percent ABV.

Grandma Van’s Candy Cane Stout
Epic Brewing/Old Chicago
It’s been a difficult year for the Old Chicago Pizza & Taproom chain. First its parent company, Craftworks, went bankrupt and had to close multiple locations across the country (including a few in Colorado), then Covid-19 restrictions forced the closure of most of its locations temporarily, and then Craftworks decided to lay off 18,000 employees. Old Chicago was eventually sold out of bankruptcy and began reopening locations. Now it has revived its famed beer Mini Tours. The latest is the Holiday Mini Tour, and starting on November 17, the tour will include a beer brewed just for Old Chicago by Denver’s Epic Brewing. Grandma Van’s Candy Cane Stout is named for a dessert that Epic regional sales manager Nate Levi’s grandmother used to make with chocolate, peppermint and marshmallows. It’s a version of Son of a Baptist Coffee Stout and “features rich, chocolatey flavors from dark roasted malts, peppermint and coffee from Novo Coffee,” the brewery says. In addition to pouring the beer at Old Chicago, Epic will distribute a limited number of canned four-packs to select markets.

Churro Stout/Bourbon Barrel-Aged Imperial Churro Stout
Cerveceria Colorado/Denver Beer Co.
Cerveceria Colorado, an offshoot of Denver Beer Co., has been brewing Churro Stout since it opened, but the beer just landed in cans in September. Brewed with actual churros, milk sugar and and chocolate malt, it’s aged with cinnamon and vanilla beans. For the barrel-aged version, which will be bottled this year, a 10.5 percent ABV imperial version of the beer spent an additional six months in Old Elk Bourbon barrels.

Laws Wheat Whiskey Barrel-Aged St. Vrain Tripel
Left Hand Brewing
Left Hand Brewing quietly brought back St. Vrain Tripel last summer, a fan favorite that the brewery hadn’t made in several years. Now, Left Hand is releasing a version of this Belgian-style ale that has been aged in wheat whiskey barrels from Denver’s Laws Whiskey House. “While light in color and body, it’s rich and soulful in flavor, with aromas of banana bread, white grape, vanilla and oak. On the palate, flavors of orange blossom, stone fruit and white pepper lead into a warming finish that lasts,” the brewery says. The beer drops on Black Friday — only at the Longmont tasting room — and is likely to sell out quickly.